#91 and the Zion Traverse 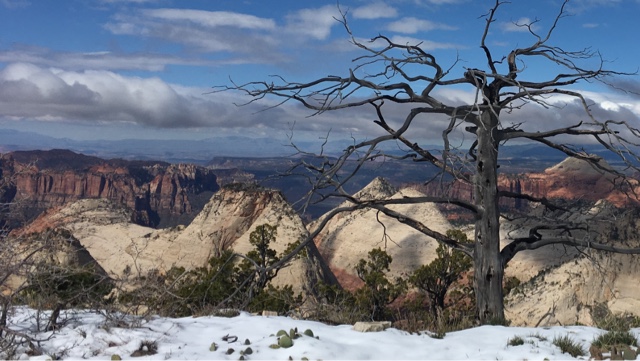 The Day Before...
Its raining. The wipers are on full speed. I'm not the kind of guy who overly uses the wipers in any car- so that's not the issue. It is wind and rain just at the slushy hail like state, and its coming down hard in this stretch of Utah. Just a few hours ago, Thomas and I were running around in what we thought was rattlesnake canyon...turned out to be devils canyon at the western edge of Colorado. We got a little "lost" so we down climbed to another trail to make it back to the car to continue on with the plan. And the plan...Zion Traverse. Tomorrow. East to West. 48 miles.
We drive and it rains, and rains, ....and rains. We try sleeping in our cars at the Lee Pass trail-head and it rains, and rains... I cant help but think that this is a lost trip- that we will eek out a ten miler on some overly populated trail and call it good.

Morning! Off to a good start!
We get moving just after 6am, after driving one of our cars to the East Rim trail-head on the other side of the park. Last nights rain has subsided to thick fog and dampens the sandy sections. We'll take it. We cruise the first climb easily and then begin the quick decent into the lowest point of the course, The Lodge. Just before the Lodge we turn up the switched path of Angels Landing. We are in the thick of tourists and it doesn't feel much like the epic trail run I had dreamt of. Thomas sets into a ridiculously quick pace and is chatting with the tourists in passing.
I'm out of my comfort zone.
The pace is to quick for me.
There are too many tourists.
A guy from Canadia slows Thomas down with conversation and I am able to rejoin them near the saddle.Wow. The saddle is filled with more... I cant muster up the mental fortitude to deal with all these tourists on the narrow trail to the top of Angels Landing- Its not really part of the trail anyway. We carry on the West Rim Trail. 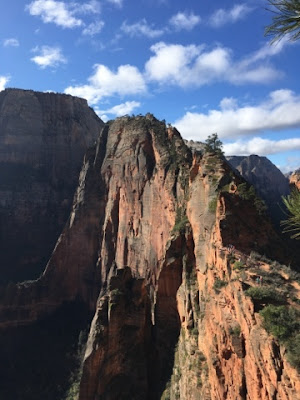 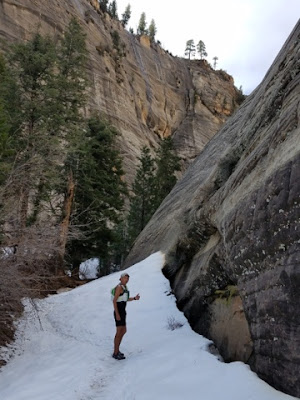 Darla is awesome! Who's Darla you ask? Darla is my RunGo app! Its an app I was just introduced to through researching route info for this trip. The app does turn by turn voice directions for predetermined routes. The voice is the standard electronic voice of a female, Thomas and I started referring to her as "Darla".  She was spot on- didn't miss a turn. Darla prompted us before a turn and then again at the turn. After three or four directions from Darla, we were so confident in her ability to lead us that we even put the map away. She told us when we went off trail, we took the East rim trail as apposed to telephone canyon due to snow. Darla is extra special. She can download a route to your device and be used when off grid. My phone was in airplane mode the entire run, and Darla lead the way. The app was free, but I did upgrade $2 for the month to be able to download routes for offline use. Get this app. Use Darla. "Darla, your a darling"
https://www.rungoapp.com/


After Angels landing we got to the meat and potatoes of the trail- no more tourists, no more man made paths... just the trail and.. mud, snowy muddy trails. I regain my pace and my composure and return to enjoying the adventure. Luckily the trail has some amazing views to get us through these obnoxiously muddy sections. After I return home I recount the stories for my mother and describe the mud. She remembers and shares my childhood tribulations with mud. I played outside in the dirt more often than not, and mud never bothered me then. Great reminders!


The rest of the day we maybe saw 10-15 other trail users. Two in particular were a couple from Seattle. We crossed paths at the halfway mark. They were on a four day backpacking trip to see this great park. They insisted that we take some of their water as they were going to fill up in the next half mile which saved us from the out and back of Saw Mill Springs. They are retired and out in the middle of nowhere enjoy each others company. My thoughts drifted to aspiring to be like them, no formal plans, no timeline, just taking it all in. They lift my spirits. What a cool lifestyle.


With our route change, we were unsure if the mileage would be the same and started second guessing how far the end was. As the sun was near the horizon, Darla spoke up "You are 1 mile from the finish". With that added relief I snapped off a last picture. My legs were heavy and my body tired. I was hungry and muddy. At this point, I couldn't help but think of how long this trip had taken to put into action, how long this epic run has been on my bucket list, how many plans were made that fell through to not get this done earlier...
...In that last mile, I am full.

During the drive home I start the process again, ...what is next. 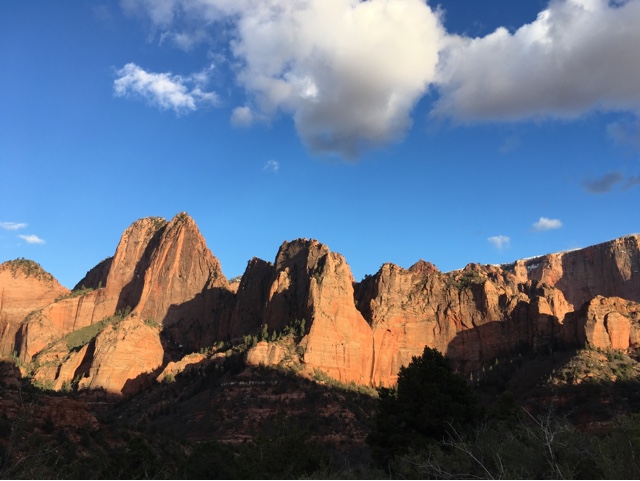